Timothy Taylor tells us that he rejoices at the great improvement in Chinese living standards since 1980, and wants to know if we feel the same way. 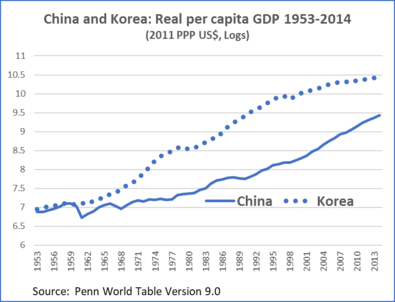 “…one might ask: Do you rejoice that China’s economic growth has lifted hundreds of millions of people out of the most dire and terrible poverty? Or do you wish the process had been considerably more restrained and slower? Or deep down, does a part of you sort of wish that it had not happened at all?”

Am I wrong to feel irritated by these loaded questions and false dilemmas?

I might, for example, feel merely a mild, benevolent approval for the progress of the Chinese people, hedged around with many rational doubts and qualifications, without any inclination to leap around “rejoicing”.

I might, for example, regret that China did not follow the path of Korea (warts and all) to achieve even faster economic.social and political progress. China and South Korea had virtually the same per capita GDP in 1953. Yet today the average Korean is close to 3 times richer than the average Chinese (Figure), while also enjoying first-world democratic freedoms, liberties and civil rights unknown in China.  Why make comparisons only from 1980? Let’s look at the entire experience of Communist rule.  While Dr. Taylor rejoices, I might reasonably feel sadness at the better path that was not taken, at the needless and enormous human suffering of the path that was.

Or I might, for example, regret that the laudable improvement in the living standards of the common people of China is also accompanied by a massive increase in the resources and power of the Communist regime, which now seeks to export its model of oligarchic business-party dictatorship from China to the rest of the world.